I thought I would take this opportunity to talk about when Rory was born and how we nearly lost him.

*Disclaimer – I am not trying to say that the NHS are rubbish as it is amazing that we have the NHS here in the UK, I’m just telling the story of what happened to Rory*

We will start where it all began..

My parents visited Hospital 1 for their 12 week scan, it was obviously meant to be a lovely experience. But when the sonographer noticed Rory had a thicker Nuchal Fold than a baby should have it seemed being a professional went out of the window. Having a thick nuchal fold is a hard maker of a baby having Down Syndrome. The words from the sonographer were ‘I don’t know what i would do if i had a Downs baby’ and ‘I did wonder when you were going to start crying.’  To me these comments are appalling and shouldn’t be coming from someone working in a hospital. All information my parents were given was out of date and nothing was really explained to them. They were just left to find things out for themselves.

Even though mum had a 1 in 5 chance they still were fine with her going to her due date. 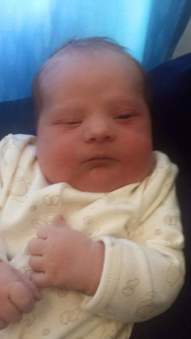 Babies with Down Syndrome are normally born early and the risk of misscarrying or stillbirth is very high, statistics show it can be as high a 30% die before they are born. Despite this they booked mum to be induced on her due date then went and cancelled it anyway. In a stroke of luck mum did in fact go in to labour in the middle of the night on her due date anyway. Yet again though Hospital 1 put Rory’s life at risk when they sent mum home after her waters had broken, we like 25 miles away from the hospital and mum’s labours are always quick. The Hospital were well aware that Rory could  potentially have Down Syndrome but still thought it the right thing to do. Mum went back up there and Rory was born in the morning. Unfortunately that’s not where it ended though, the midwives then avoided the room and they took 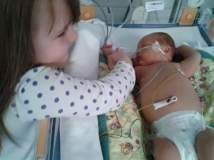 Rory away to be checked over, for him only to then be gone 6 hours before telling my parents what had happened to him. Rory was very poorly and in NICU, he hadn’t done his first poo and in turn his bowls got back up and infected causing him to get sepsis. Rory was then transferred to another hospital (We will call this one Hospital 2′ where thankfully he was met by a brilliant team of doctors 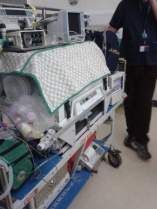 called Hirschsprung Disease. This is a congenital condition meaning it develops while your baby is growing in the womb. Hirschsrpung is where the nerves in the bowl don’t develop, this can cause poo to build up and cause a blockage. Luckily at Hospital 2 there was an amazing surgeon who successfully operated on Rory for 8 hours to give him a stoma. Hospital 2 saved Rory’s life. Hospital 1 potentially put Rory’s life at risk. Hirschsprung can be detected on an ultrasound from around 14 weeks, he had many scans so why did it get missed?

Rory had his stoma reversed so he no longer has one at Hospital 2 in August 2015. He sees a lot of consultants at both hospitals and we are so grateful for the work the NHS do but we will never be forgotten that Rory nearly lost his life because the hospital missed something.

I’m working with yourlegalfriend.com they specialise in medical negligence claims. Claims against the NHS don’t happen very often and personally we didn’t want to claim but i wanted people to know that You Legal Friend will be there for you if you were to ever need them.

*This is a sponsored post for Your Legal Friend*

One thought on “When we nearly lost you…”